Braehe & Schiele: Bridging the East With the West

AMMAN –When it comes to understanding the most complex part of the human experience , mediums such as painting simplify the challenge. When words fail to express the psyche, expressionism is our answer. In this article, I will explore the outcomes of looking at one’s self  in the eyes of a muse through the brushes of two artists Egon Schiele and Syrian artist Anas Al Braehe. These two artists put intimate, human relationships at the forefront of their paintings and translate their attitudes towards them to their viewers. To what extent do their relationships with their sitters and differences in artistic style express an emotional state?

Based in Beirut, Anas Al Braehe was born in 1991 in Syria where he later attended Damascus University for a degree in Fine Arts. Due to the unstable political climate in Syria, Braehe moved to Lebanon where he continued his higher education in Psychology and Art Therapy at the Lebanese University.

In a brief interview with Braehe, we learned more about his beginnings as an artist and influences

I started painting from a very early age, around 10 years old. I always felt painting is a part of me and it started to grow with me. My early interests grew towards nature. Then I studied Fine Arts at Damascus University. After which, I pursued a Master’s degree in Art Therapy and Psychology in Lebanon.

One of his most touching works is his series with Manal, a Syrian woman living in Swaida who was his neighbour back home. As described on Anas’ webpage, his story of encountering Manal started with his mother sewing dresses for her. Her grace and poise drew Anas into choosing her as a model for his paintings. As they began meeting more often, the better friends they became. In his work with Manal who lives with down syndrome, Anas explores his own journey, while Manal carries out her daily routine. Seeing beyond her differences, Anas documents her movements and her facial expressions, whilst seeking a definition of himself. 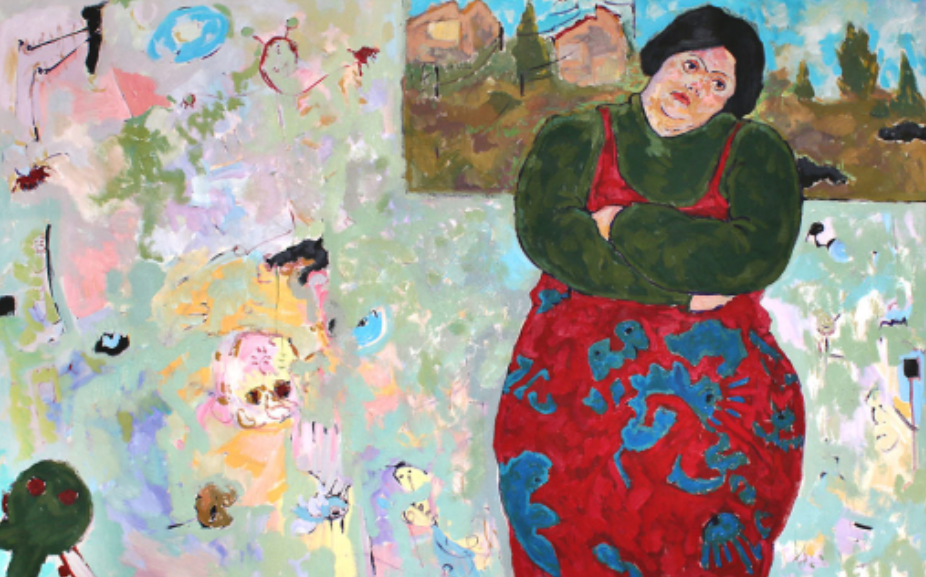 In Neighborhood Scenes, Manal looks away with a tone of concern in her eyes, creating a lonesome air that opposes the vibrance in the background engulfing her. Her red dress is a representation of the liveliness and boldness of her soul, which might seem a little hidden with her averting eyes. The irregular shapes in the pattern behind Manal speak of the chaos of the outer world and the physical noise that distract the inner self from feeling the deepest forms of emotion. With the direction her eyes are heading towards, Manal could potentially just be listening to the artist’s instructions; but we could still be scratching the surface.

Manal’s gaze seems nonchalant; yet it seems as though a remote subject always keeps her busy while conversing with Anas.

With Neighbourhood Scenes lies a scope of thought that could take a more social shift. Viewers could be concerned as to what she is thinking of. These proposed emotions can also just be assumptions brought about from the way she is singularly portrayed; immersed in solitude and independence. The latter reminds viewers of times they were once alone in their lives, but shows that it is neither a dull state of mind nor a completely exciting one; just a sliver in between. 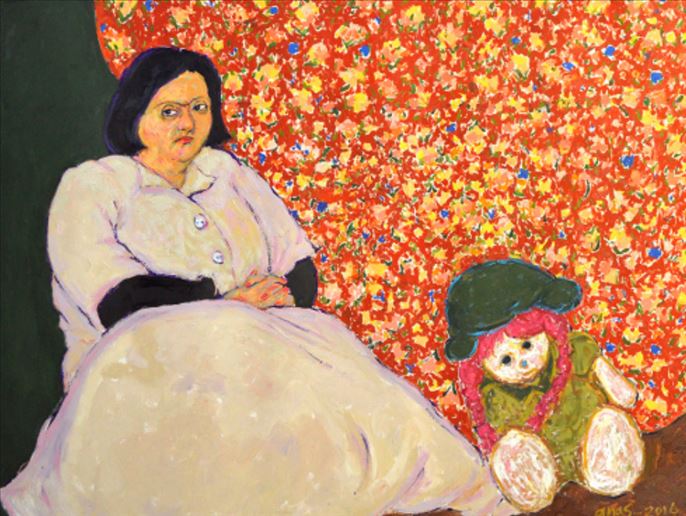 In A Glance, Manal’s vision is still focused on an object or a person in the distance that remains anonymous. It could also be just a moment of observance or listening to the painter speak behind the canvas. This time, a red-haired cotton doll joins Manal in the scene. The opposition of the states of the two females in this piece; human and artificial, striking emotion and not showing any, somehow shows a strange relation between them despite the differences. The doll could be a possible personification of Manal’s childhood, or the childhood of any little girl brought up in Syria. It strikes a touch of innocence, perhaps a memory Manal longs for or misses from her earlier years.

We can see Braehe’s competence and consistency of choosing his themes with a thread that connects them all, even with the smallest of clues. He captures the essence of the human condition, and turns the perceived mundaneness of everyday life into a collection of emotions we’ve long neglected, or perhaps even never knew existed.

Referring to the inspiration behind the environments Braehe transmits onto canvas, he told artmejo:

Some of my muses include Henri Matisse and Paul Gauguin. Another source of inspiration is my surrounding natural environment. 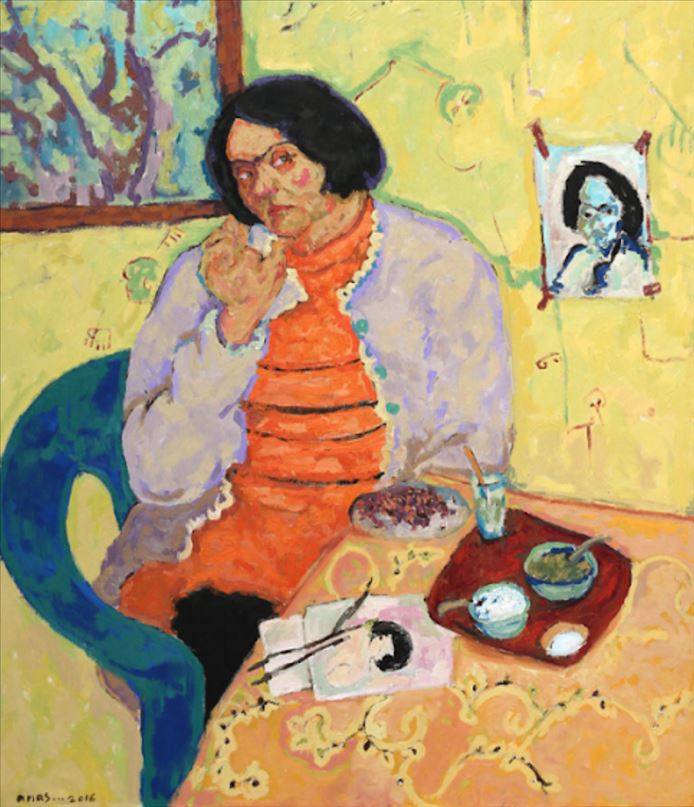 Another work of his is Manal with Pomegranate, completed in 2016. Manal here is seen enjoying a pomegranate alongside a glass cup which she is drinking a beverage from. As she spends some time for herself, a riveting detail appears behind her in the yellow background. Hung with a piece of tape, another portrait of Manal stands in different colors and strokes. While the figure of Manal in the center clearly shows where her eyes are headed and her physical appearance, the Manal behind her seems vague – in terms of expressions, facial features that barely show, and the abstract colors that object to the more human colors shown on her cheeks and temples. 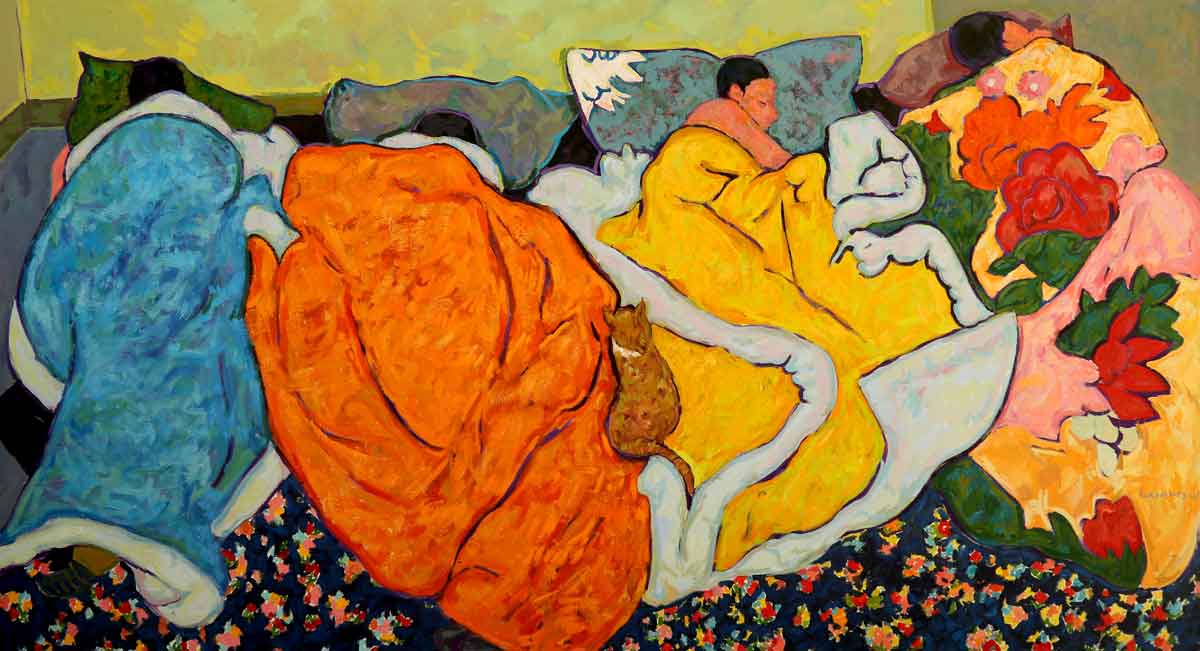 While maintaining the theme of routine and the circumstances that determine and follow it, we shift our attention to another of Braehe’s pieces. Titled The Dream Catcher, Braehe paints four men sharing a sleeping space separated by a cat tucked in between them. Here, he points at the brotherly bond and intimacy shared by the laborers, who are seen sleeping after a long day. The people he addresses in this specific painting are Syrian men, along with the hardship of their everyday lives, the struggles of their physically demanding jobs, and the final reward of rest – a warm snooze into a calmer world. This work shares striking resemblance to Egon Schiele’s painting work, especially The Embrace from 1917.

Austrian painter Egon Schiele grew up in a harsh environment where his artistic tendencies were hindered by his strict, short-tempered father. Being more introverted than other children during his elementary years, Schiele’s interests were diverted to drawing and sports. When he received recognition for his passion for the arts, a starry-eyed 15 year old Schiele soon enrolled at the Academy of Fine Arts in Vienna in 1906. 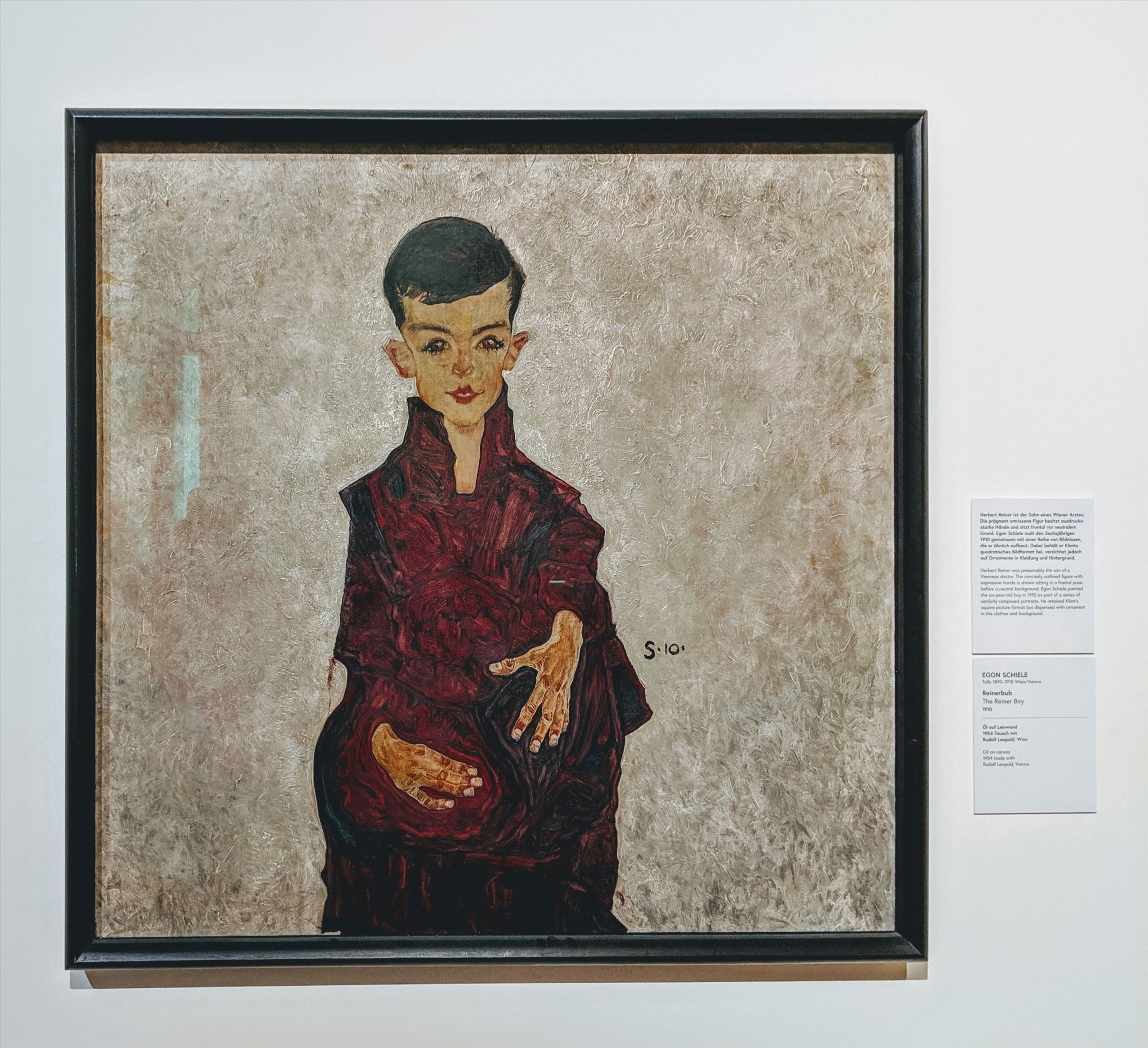 The Reiner Boy by Egon Schiele, 1910 . Photo courtesy of lifeinanalogue

Egon Schiele was later taught by Gustav Klimt at the Academy of Fine Arts in Vienna. When he started to produce his first works from 1907 to 1909, his style mirrored his mentor’s. However, with the foundation of the Neue Kunst Gruppe in 1909, Schiele began to seek independence through his brush and formed his own signature stroke that would later mark him as one of the world’s most remarkable art influences. Seeing Klimt as an inspiration for his works, it was certainly evident in his style as well. Just like Klimt, Schiele focused on painting the people of his interest in the center, with a calm yet diverse background to emphasise the words said through color, texture and light. As the case is with Reiner Boy displayed at the Belvedere, the deep red on the boy’s lips, which also matches his garment, gives some mystery, maybe an unveiled riddle about the boy. The sharpness of his gaze brings about the mischief of a child, contradicted by his disciplined posture. 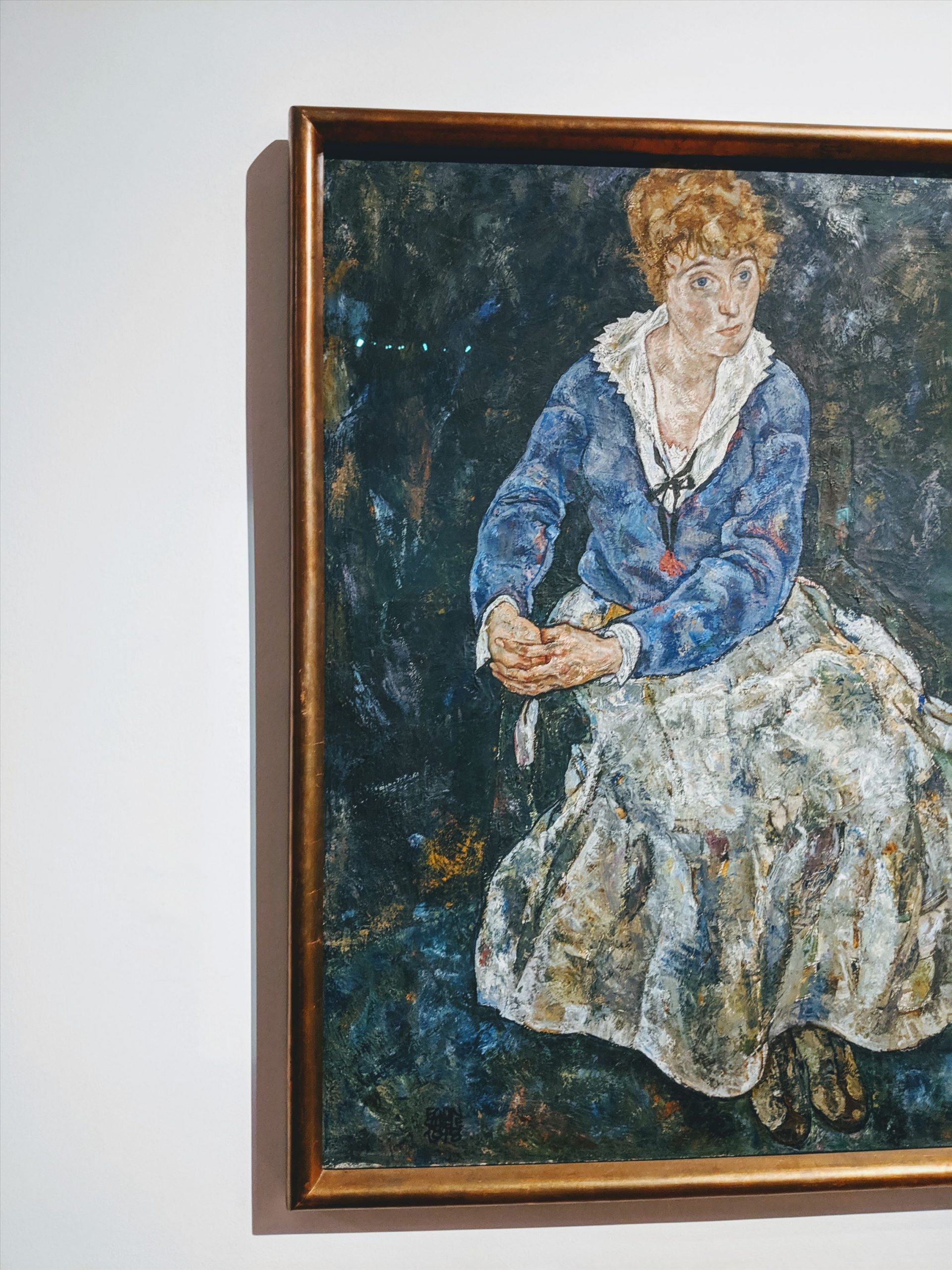 After Schiele’s marriage to Edith Harms, it was not long before she became a muse of his. In one of his works from 1918, a short time before his death, a portrait of her seated with a blue top was drawn. Her posture is still and graceful, with a quiet look fixated into the distance. The timing of the painting contributes to a number of analyses about its message. Edith could be looking back at her life and its events, what could have and have not been, and the passing of time through flashes of youth and the present. 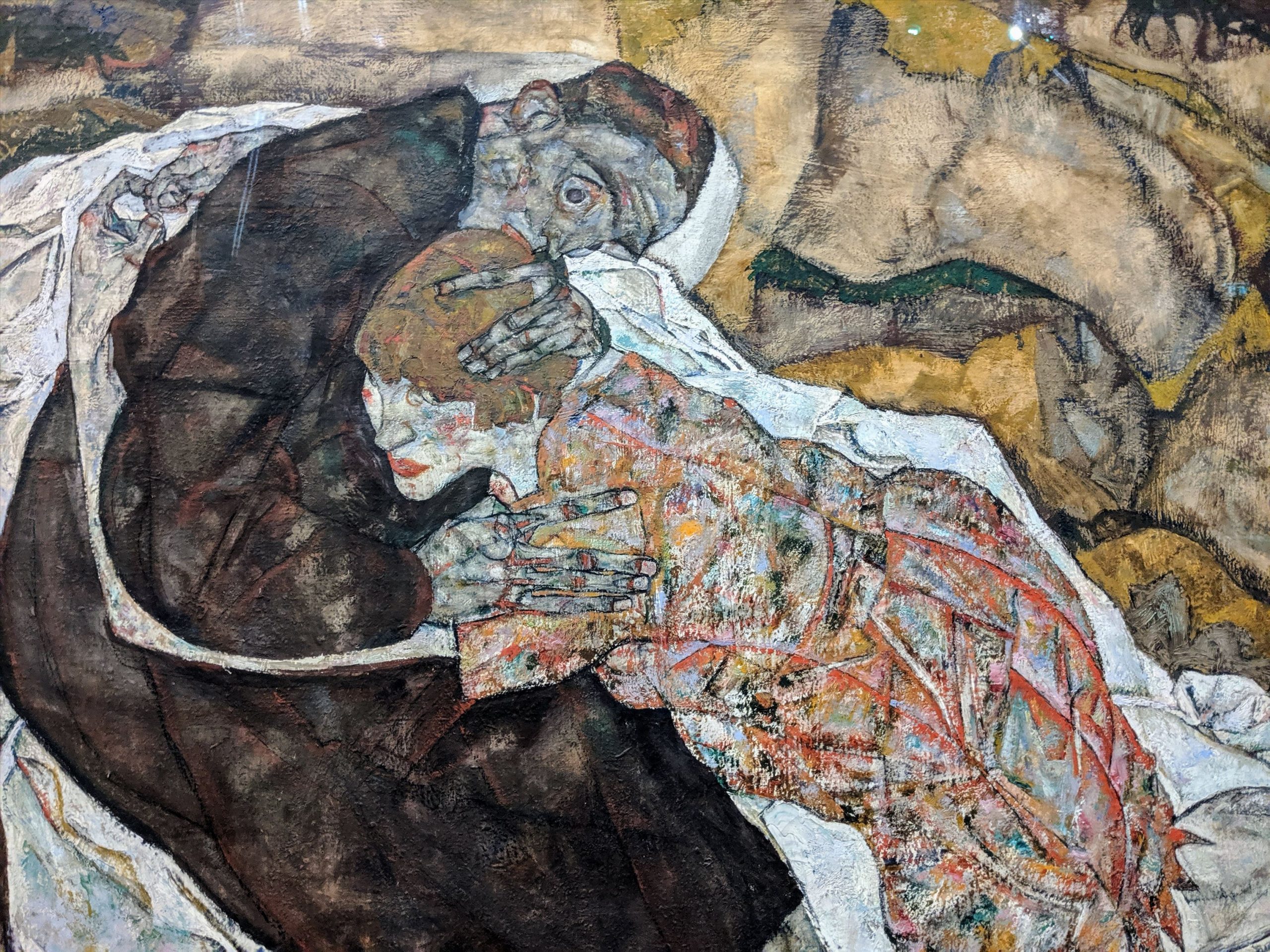 Death and the Maiden by Egon Schiele, 1915. Photo courtesy of lifeinanalogue

Completed by 1915, Schiele‘s Death and The Maiden came to be a key portrayal of human pain in times of loss and grief. It is a depiction of Schiele‘s love life which deeply resonates to him and inspired the birth of a number of his paintings. Prior to his marriage to Edith Harms in 1915, he was in love with a woman named Wally, who ironically introduced him to Edith. Having the painting completed months before his marriage, Schiele embodies separation of true love and its painful dissolution. The color palette used on the man’s face speaks of sadness, weariness and the loss of hope. Wally in the painting holds onto Schiele, the so-called personification of Death, as her body screams of hopelessness and the fear of what would happen after their love is lost to Schiele’s decision. In Death and The Maiden, we don’t only sense the immediate pain of parting, but also its aftermath. Schiele’s eyes above are remorseful, almost making him regret what he decided amidst the chaotic background the lovers are immersed in. This could symbolize the circumstances that drove them apart. 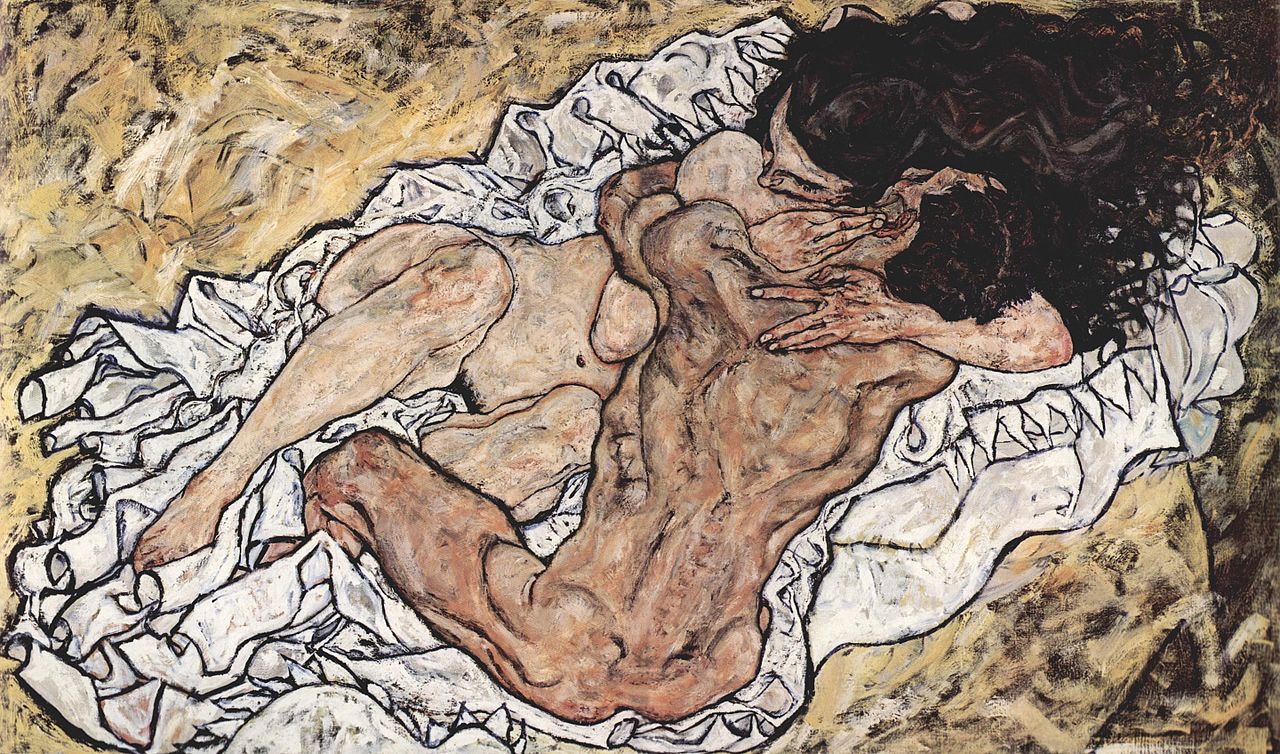 Experiencing the spirit of being human for Schiele means embracing sensuality and pure love. “The Embrace” of 1917 is one of the greatest examples that present the structure of two lovers, sharing a moment solely private and belonging to them. Here, the man’s firm grip onto the woman translates into the feeling of love as a necessity, like a personal need no one can survive without. Edith and Egon here are pictured two years after their marriage in 1915, a time where their love grew stronger and when Schiele transitioned into a happier state of mind. Although many of his similar works were considered a taboo to be publicized, they lean more towards a true rendering of humanity.

Even when a contemporary Syrian painter based in Beirut and an Austrian artist from early 20th century Vienna cannot physically cross paths, their relationships with both their works of art and muses do. While Schiele depicted the agony of love and eroticism he felt throughout his life, Anas developed a blooming, unique friendship with Manal. We observe the application of two human phenomena; individuality and courtship, through artists from different times, coexisting on the same spectrum. Because of the mind’s dependence on culture, geography and individual experience, it is a perpetually expanding field of study. With the timeless, grounded works of Schiele and Braehe‘s framework of self-perception through Manal, understanding each other’s thoughts and feelings becomes less of a communication barrier, and more of an enriching lesson to all.

Write by Zina Qabbani in Artmejo